If you are using the website minpension.se for planning your early retirement, I have some bad news for you: Your public pension (allmänna pension) will not be as high as they make you believe.

In Sweden, we have this great online tool for estimating our future pension, minpension.se meaning (you guessed it) my pension. I log in with my digital identification tool BankID installed on my phone, another ingenious invention. This gives me an overview of my pension savings, both the public pension (allmänna pension) administered by the state and occupational pension (tjänstepension) from different companies.

Even better, minpension.se lets me simulate different scenarios: What if I change my salary? What if the performance of my pension savings changes? And, most importantly, what if I retire early? Here is where things get a bit tricky.

Recently I played around with the estimation of my own pension and realized something strange: The estimated public pension did not change if I adjusted my pension age between 55 and 65 years. For later pension age, say 70, pension gets higher as expected. But I get exactly the same pension for a pension age of 55, 65, and anything in between.

Well, this would be too good to be true; and it is not how the Swedish pension system works. In essence, my pension is based on an amount of savings. The moment I retire, they use statistical data and prediction to figure out how many more years I am expected to live. Based on that, they divide my savings by the delningstal (divisor), which yields my yearly pension. The Swedish public pension (allmänna pension) can be taken earliest at the age of 65. So the delningstal will be the same, no matter if I retire at 55 or 65. What will be quite different is the amount of savings. If I retire at the age of 65, I will continue to save pension money for another ten years. So the pension I will get must be much higher, compared to retiring at the age of 55.

Strange I thought and contacted the customer service. In their first reply, they told me this is a known limitation. They cannot adjust the last month of income to my pension plans. Instead, they always assume that I will work until the age of 65. See, I am in general not so concerned about limitations. Any tool will have its limitations. The important thing is, of course, to make the user aware.

I went back to minpension.se and tried the simplest thing. Right after logging in, I am taken to their basic pension estimation, where I can only set my planned retirement age. I select “Ta ut pensionen vid: 55”, literally, take out my pension at the age of 55. I am then presented with the graphic below. 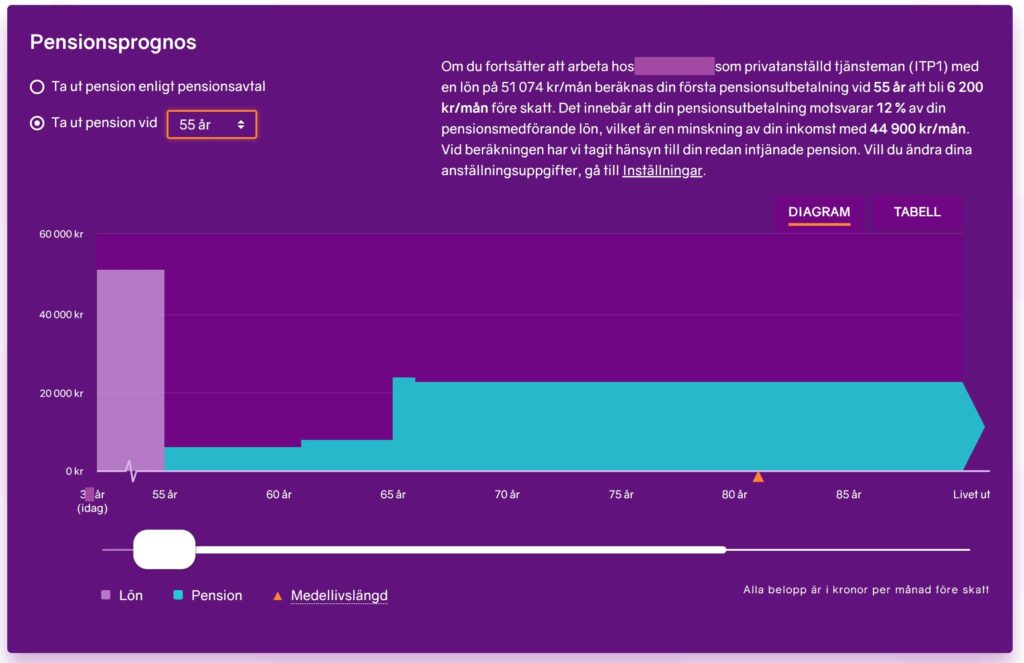 Now, the text is in Swedish and a bit small. But what you see is a timeline of my income. My salary is light purple and ends at the selected pension age (55). My pension is shown in light blue. Until the age of 65, it is very small, because only the occupational pension is paid out. Then after 65, the public pension kicks in and gives me a decent pension.

Now I ask you: Based on the settings and the graph, would you expect that I have a salary between the age of 55 and 65? I would clearly say “No!”. But this is exactly what the estimation assumes. Due to the limitation which the customer support confirmed, the tool calculates the public pension based on a salary until the age of 65. So the pension they calculate is too high.

Is this a big issue? Well, I think so. There is no information anywhere about the limitation. Therefore, if you use minpension.se to plan your early retirement, they will give you an overly optimistic estimation. A back-of-the-envelope calculation shows that the estimated public pension is about 25% too high, around 3.6 kSEK per month. This applies to someone who started working at the age of 25 and earns more than 40 kSEK per month, which is the cut-off salary for the public pension. For lower salaries, the effect is proportionally lower. E.g., for a salary of 20 kSEK, the estimated pension is about 1.8 kSEK too high. After taxes, the maximum difference is still 2.7 kSEK. This is what you would pay in monthly fees for a small flat that you own. Quite a blow to your budget!

We should also consider the reach of this mistake. Minpension.se is the official tool for overall pension estimation and is paid for by 50% by the Swedish state. Even the Swedish Pension Agency (pensionsmyndigheten) uses the tool on their website. Interesting enough, the earliest retirement age on their page is 65. They are probably aware of the limitation. Minpension.se boasts that they have 3.6 million users, which is around 70% of the Swedish working population. All those people get a wrong impression about their chance to retire early.

So, I contacted customer service again. I explained to them how exactly I am using their tool and I asked them when they are planning to solve this issue: When are you planning to add information about the limitations? And when are you getting rid of the limitation? For the ones of you speaking Swedish, I post their answer as a comment below. It seems like the do not want to discuss this. Instead, they referred me to the Swedish Pension Agency. This is a bit funny because they use the very same tool.

The bottom line then: minpension.se is the official tool for pension estimation, and they have a serious flaw in their calculation. They know about this, but apparently they have no plans to fix it. Really not so great…

So what can you do, until minpension.se eventually fixes their tool? You can do a rough estimate yourself. It will not be too difficult to calculate how much pension savings you will have by your planned pension age. The difficult part is to figure out your delningstal: How to calculate your monthly pension from your pension savings.

Here is what you do: Log in to minpension.se and go to the pension simulator. Change the expected performance (förväntat värdeutväckling) to 0%, which makes the calculation easier. Keep the retirement age at 65. Now set your salary to a few different values and note down the estimated public pension. Next, calculate the pension savings for each salary. Take into account your present savings and 16% of the salary below the cut-off of 40 kSEK. If you divide those savings by the corresponding expected pension (per year), this gives you your delningstal. It should be a number between 15 and 20, and it should be more or less the same for different salaries. The rest is easy. Figure out your pension savings by the age of 55 and divide by your delningstal. This is what your actual public pension before tax will be.

When I first figured out the problem with minpension.se, I briefly saw my early retirement dreams bursting. Fortunately, the numbers still add up. But to tell you the truth, the margins are quite a bit tighter than I had planned before. We are a couple, so the common budget was wrong by more than 5 kSEK a month after tax. That is around a fifth of our retirement budget.